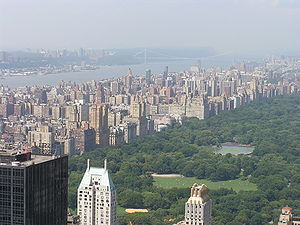 Upper West Side is a neighborhood in the borough of Manhattan in New York City, situated between and the .

Whereas the Upper East represents "old money," the Upper West Side is seen as "new money" in Manhattan society.

The neighborhood is where Dan Humphrey and his sister Jenny live in the Gossip Girl novels. Throughout the novel series, the two are teased by their peers for having to travel by subway and for not living in the world of the wealthy Upper East Siders. The Humphrey family reside in a loft, a large four-bedroom apartment in New York City at the top of an old building. It is stated that their apartment is not cleaned often, except by the cat.

Chuck's hotel The Empire is located on the Upper West Side. Columbia University, where Nate and Blair attend, is also located in the neighborhood.

Retrieved from "https://gossipgirl.fandom.com/wiki/Upper_West_Side?oldid=68775"
Community content is available under CC-BY-SA unless otherwise noted.