Roy Sachs is a recurring character in the Gossip Girl revival. He is portrayed by John Benjamin Hickey.

Roy is the homosexual parent of Max Wolfe, who works as a landscaper.

In "Lies Wide Shut", at family dinner, He gushes over his landscaping business to Max, just as Max's dad, Gideon Wolfe, makes a grand entrance wearing a corseted dress. He has plans to attend a new Jeremy O'Harris play, which is enticing to Max as it's promised to have genitals and gore. Gideon assures Max and Roy that they have tickets for tomorrow night - including a block for Max's friends. As the conversation drifts, Roy and Gideon disagree over Gideon's choice of attire, while Max nervously watches the brimming tension. The next day, Gideon emerges to Max wearing a suit, which prompts Max to push his dad to be his authentic self in the same sense that Gideon and Roy raised Max to be. Gideon agrees to change into something more authentic to himself, and Max chimes in that he will do the same. At the play, Gideon and Roy are seated by Rafa Caparros, Max's classics teacher. Gideon recognizes him from the PTA meeting and makes light conversation with the man despite Roy's clear awkwardness with the situation.

After the play, Gideon attends an after party where he and a friend discuss the play. They didn't like it and found too aggressive, with their comments prompting Zoya Lott to interject her opinions which surprises Gideon. The man is left speechless when Jeremy O'Harris overhears and takes Zoya away to talk in a "less confrontational space". Gideon is speaking with is friend when Max pulls him away to the bar. Once there, he outs Roy's affair to Gideon in front of Rafa. He pulls up the fake profile with Rafa's name and image, though Roy tries to wrestle the phone out of Max's hands. Gideon intercepts and is horrified to learn the truth, especially since it involves Max's teacher. Max, at Rafa's insistence, admits that he set Roy up using a false profile. His dads continue to argue at the bar, with the fight escalating as Roy admits that Gideon's femininity is an issue for him. Gideon walks away in an emotional state. The next day at home, he ignores Roy.

Roy is a tall man standing at 6'0" weighing roughly 179lb.[2] He has thinning grey hair and brown eyes.

Roy is very attached to his work and cares for the family he has created, but displays a strong sense of cowardice. Instead of being honest with his husband about his complex feelings over Gideon's femininity, Roy chose to hide his feelings and display them in passive-aggressive clothing suggestions or comments. He was too afraid to talk with Gideon over the issue and had affairs to find what was missing in his marriage. When his lies were outed by his son Max, Roy turned on Max and blamed him for telling Gideon as opposed to coming to him first. He refused to take responsibility for his part in the affairs. 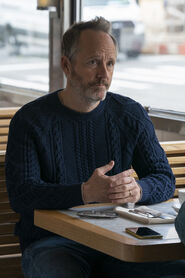