watch 02:11
'Gossip Girl' Profile: Raina Thorpe
Do you like this video?

The Kids Are Not Alright

Raina Thorpe is a recurring character in the fourth season of the Gossip Girl television adaption. She is portrayed by Tika Sumpter.

Raina makes her first appearance in The Kids Are Not Alright, when she meets Chuck Bass when he comes to the Thorpe Enterprises office looking for her father, Russell Thorpe. She lets it slip to him that there's a deal on the table for the sale of Bass Industries that is set to close in 24 hours. At a party hosted by Russell that night, Chuck comes to him desperate for any chance of teaming up to save the company. Russell reveals that Raina is his daughter and that he wasn't aware that Bass Industries was for sale. He also explains that if he did know, he would have bought it to dismantle and destroy it due to his anger at Bart Bass. Later that night, Raina offers to sleep with Chuck, and he presumably takes her up on the offer. Soon after, Chuck learns that Nate Archibald's father, Howard "The Captain" Archibald has taken a job with Russell. He asks Raina to have him fired, but she refuses. They argue for a period about combining business and pleasure, but eventually make up (Damien Darko).

Chuck later decides that the only way to get Russell to stop buying Bass Industries is if he can get Raina to fall in love with him. He enlists Blair Waldorf to help him, and is able to convince Raina to skip her meeting with the Thorpe board, where they will be voting on whether to buy the company or not. However, she later founds out that he kept her away on purpose and distances herself from him. Afterwards, Blair talks to her about Chuck and is able to get her to give him another chance (Panic Roommate). On Valentine's Day, Blair decides that a way to increase her standing at W Magazine is to get Raina to give an out of the ordinary interview. Raina originally agrees to do so, but backs out after Serena van der Woodsen asks her to; in an effort to keep Blair from getting hurt. At Chuck's party that evening, it's revealed he set up a private room for the two of them to have a romantic night together. But Russell planned to set Chuck up all along, and creates a right between him and his adoptive mother, Lily van der Woodsen. They argue in front of Raina, who is shocked at how little family means to Chuck, and the two break up (It-Girl Happened One Night).

In attempt to win her back, Chuck enlists Nate to help talk him up to Raina. The two end up spending the day together, and Raina has fun hanging out with Nate. They become attracted to each other (While You Weren't Sleeping) and eventually begin dating (Empire of the Son). At the same time, Russell blackmails Chuck, and Raina listens in, as Chuck is trying to prove to her how ruthless her father is. Shocked, she leaves without talking to him. Afterwards, Russell tells Chuck that the reason he hates Bart is because when he burned that building down intentionally (originally explained in season two's Bonfire of the Vanity), his wife and Raina's mother, Avery Thorpe was inside. After their meeting, Russell leaves to go back to Chicago but tells Raina that he is very proud to be her father and that she looks like her mother. In The Kids Stay in the Picture, Russell and Raina are slated to be photographed in the Modern Royalty book, but she refuses to go due to her being angry at her father. After the photographers ask if she would want to be photographed with her mother instead, she becomes curious on what happened to her mother and vows to look for her. Along with Nate, she hires a PI and he finds a woman named Avery Thorpe in New Jersey, so they go with Chuck to see if it's her. When they find her, they learn that she isn't her mother. Afterwards, Chuck confides in Nate about what Russell told him, and receives confirmation from Andrew Tyler that Avery was indeed in the building during the fire (Petty in Pink). Nate tells Raina, who becomes angry that Chuck has known the whole time but said nothing. She tells Nate to choose between her and Chuck, and he ultimately chooses Chuck. However, he chooses to be with her after seeing Chuck have a meltdown after learning of Blair's engagement to Louis Grimaldi. As revenge, she calls his uncle Jack Bass to invite him to come back to the city (The Princesses and the Frog).

In Shattered Bass, Nate finds out she asked Jack to the city, he is disappointed in her. Later, Jack teams up with Nate and Chuck to take down Russell, and Raina learns Jack never planned to help her out. Meanwhile, Jack, Nate, and Chuck learn that Russell was the one who left Avery to her death, not Bart. In exchange for not telling the police or Raina, Chuck orders Russell to leave New York and never return. Raina renews her vow to ruin Chuck and plans revenge. In order to save Chuck, Nate tells her that her father was responsible for her mother's death, and she cuts all ties with her father. Thinking Chuck rolled on their deal, Russell kidnaps Blair and plans to leave her to burn at the site of Chuck's new hotel. However, she is able to call Chuck and he, Nate, and Raina go to save her. They do so, and Raina tells her father that she forgives him for killing her mother because it was an accident. She continues that he is going to jail for a very long time and will never come to visit him. Afterwards, she tells Nate she wants to return home to Chicago. This is Raina's last appearance in the series (The Wrong Goodbye). 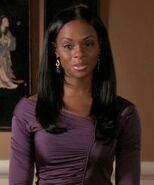 Raina with her father, Russell Thorpe 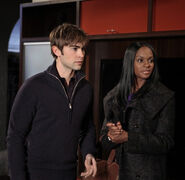 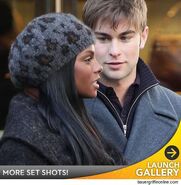 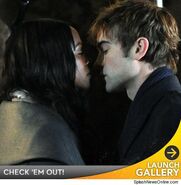 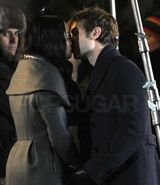 Add a photo to this gallery
Retrieved from "https://gossipgirl.fandom.com/wiki/Raina_Thorpe?oldid=78776"
Community content is available under CC-BY-SA unless otherwise noted.