Rafael "Rafa" Caparros is a main character in the Gossip Girl revival. He is portrayed by Jason Gotay.

In "Just Another Girl on the MTA", Rafa returns to Constance Billard St. Jude's School for his first day back as a classics teacher for the school year. He quickly becomes enthralled in the drama surrounding the students and teachers at the school, lending a helping hand to newcomer Kate Keller, the new English teacher. He is eager to learn about the previous Gossip Girl account, but doesn't help them form the new account.

In "She's Having a Maybe", Rafa skips the annual parent teacher conferences as he isn't mandated to be there as an elective teacher. He instead goes to a club where he hooks up with a man. He passes Max Wolfe and they make eye contact, but don't talk until later that night when Max questions why Rafa is there. As things progress, Max learns that Rafa is notorious in the gay social scene as a gifted hookup, which strikes Max as intriguing as he thought that title belonged to him. He tracks Rafa to a sauna that he visits twice a week. Max brings Aki Menzies to the sauna and they kiss to make Rafa jealous. Seeing the public display, Rafa approaches Max and asks the student if he's following him as this could get him fired. Rafa reiterates that he isn't interested and walks away. Growing tired of the back and forth, Max makes it blatantly clear at the charity auction that he wants to have sex with Rafa. Rafa upholds his statement that he won't sleep with his students, much to Max's chagrin. They eventually broker an unofficial deal to hookup after graduation.

In "Lies Wide Shut", Rafa attends a meeting called by Headmistress Burton, where he admits that Gossip Girl has helped the teachers as students are more respectful. Not all of his colleagues are in agreement. After the meeting, Wendy suggests to her Gossip Girl co-conspirators, that they pin Gossip Girl’s Instagram on Rafa, but Kate thinks he’s “too big of a fish too fry.” Later, Max, with help from his friend Aki Menzies, creates a false account on the gay dating app Scruff using Rafa's name and image, with the purpose of catfishing Max's father Roy Sachs. Max invites Rafa to a play that evening where his dads will be in attendance. He sits with Max's parents after Max insists on switching seats with him. Rafa even meets and has light conversation with Gideon Wolfe. After the play, Roy approaches Rafa to apologize for the message during the show, though Rafa tells Roy he must have him confused with someone else. Later on that night, Max outs his fathers affair by using the false account with Rafa's name on it - much to everyone's surprise. Rafa assures Gideon that he wasn't involved and forces Max to out his involvement. When Max unexpectedly shows up at Rafa's apartment, Rafa uses the opportunity to tell Max he doesn’t appreciate being used. Max cries on his shoulder and Rafa lets Max sleep on his couch that night.

In "Fire Walks With Z", Rafa asks Kate Keller and her fellow Gossip Girl cohorts if they've received any tips about Max in the past few days. He expresses concern over Max as the student hasn't attended school for a few days. Kate promises to keep an eye out for anything relating to Max. As the day progresses, Rafa walks outside to the front steps when he sees Max getting out of a wellness retreat van and kissing the nurses that dropped him off. With Max's return to Constance, he is higher then usual, disheveled, and adamant on having sex with Rafa. The teacher continuously turns down Max while trying to make the boy realize that he's out of control.

At Julien and Zoya's party that evening, Max is turned away at the door for not being on the list. He tries to shove his way through, proclaiming that he "is the list", but Rafa intercepts him and pulls him away. He had asked Julien's father to remove Max from the list as Max would be carrying. Max tries to lie that he isn't, but Rafa pickpocketed a tin of Altoids that are filled with a variety of pills. Max admits that he's on acid and a few other substances, leading Rafa to wonder why Max is breaking all the clear boundaries he is known for setting. Max lashes out that Rafa used to be hot but is now a bad trip. Finally fed up, Rafa drags Max away from the party.

Once they arrive at the Wolfe-Sachs residence, Rafa tells Max that Roy has been worried about him and wants him to come home. Max coldly replies that Roy is only his father on paper - Gideon is his biological father. Rafa admits that not everyone has one father that loves them let alone two. Max apologizes for being insensitive and agrees to speak with Roy. When the conversation goes terribly, Max retreats to Rafa's apartment. Roy had blamed Max for everything but Rafa assures Max that it wasn't his fault. Max wonders what is wrong with him, believing that Rafa is probably the only person who disagrees. Rafa tries to get Max to leave but instead, the teen kisses Rafa until Rafa concedes and they have sex.

In "Hope Sinks", Rafa and Max continue to hookup whenever and wherever they can, even traipsing around school. They barely avoid the questioning stares of Max's friends. Rafa is insistent he and Max keep their relationship low-key as to avoid trouble, though a perceptive Aki Menzies notices the stares and Max trailing Rafa more than usual. Aki confronts Rafa in a bar and threatens to go public with the relationship. Rafa quickly spins the narrative back onto Aki, stating that it wouldn't be hard to turn it around as Aki stalking Rafa. He pretends that Aki shoved him and makes a scene, then covertly tells Aki that he has witnesses now who will attest to Aki's harassment. Aki, now realizing how serious Rafa is, backs off and leaves the bar. However, Aki continues to do retcon on Rafa and learns that the story he's been telling of a tragically separated family is a lie. Rafa's family owns a winery in the South that features a happy family photo. That night, Rafa and Max attend the Halloween party that evening, with Rafa wearing a mask to avoid being spotted by anyone. Though when Rafa leaves to use the bathroom, a man named Victor approaches Max and commends him on securing Rafa. He comments that Rafa still likes them young. Max questions the statement, with Victor explaining that as a Senior in high school, he dated Rafa who was also his teacher. This revelation leads to a fight between Max and Rafa, where Max ends their relationship and realizes that his friends aren't there for him because he pushed them away to be with Rafa. Max leaves him at the party alone.

In "Parentsite", Rafa approaches Max at school but is rebuffed by the teenager. Later in the day, he convinces Kate to give him access to Gossip Girl which he uses to spread false rumors about Max having STDs using photos of Max waiting for Audrey and Aki at the hospital. Max goes to Rafa's apartment and confronts his teacher about the lies. Rafa threatens to continue his attacks unless Max returns to him; Max retaliates by threatening to go public about Rafa's predatory behavior with students. When Max leaves, Rafa reaches out to Roy on a dating app in hopes of seducing the father and hurting the son in the process. Max meets up with Roy later that week and Roy tells his son about meeting up with Rafa. Max asserts that Rafa is not a good man and breathes a sigh of relief when his father reassures Max that he saw through Rafa's displays and they only had a conversation over drinks. Max retaliates against Rafa by sending a sex tape he made with Rafa to Gossip Girl. The illegal video was in the inbox of the Gossip Girl account long enough for Wendy, Kate, and Jordan to see it. When the video mysteriously disappears, Kate and the group deduce that Rafa must have seen the video. The ghost writers then worry that Rafa knows that they know of his secret.

Rafa is an outgoing and social man with a mysterious confidence. He is a daring teacher who runs in similar circles to his elitist students, making him a frequent face for them. He is known for his sexual prowess and promiscuity with other men, displaying a form of notoriety that affects his ego, while keeping a hidden reputation as a sexual predator under raps.

Rafa has a history of having clandestine affairs with his students and is adept at manipulating situations to get what he wants. He feigns having a moral high ground of not having sex with students when in public while secretly flirting with them and making them pursue him. He employs a staple tactic of grooming by taking advantage of Max’s emotional vulnerability and supporting him through the ordeal until the moment was right to begin a romantic relationship with the younger man. He then manipulates Max’s behavior and relationships to isolate him from his friends and family so he can keep Max to himself. When Max confronted him about his previous relationships with students, he turns the confrontation into an opportunity to blame Max; reminding Max who pursued who in the situation.

Beyond Rafa’s mysterious and amiable exterior is a callous and vindictive heart. He fakes a confrontation between him and Aki to paint the teenager as the aggressor in public so Aki would leave. He spreads lies about Max via Gossip Girl, threatening to continue unless Max rekindles their relationship. When that fails, he attempts to seduce Max’s father to hurt Max further. 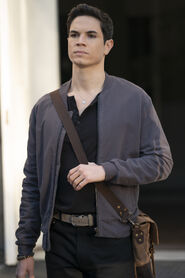