Posts on a Scandal

Posts on a Scandal

While an accusation from Gossip Girl throws Julien’s life into a tailspin, Zoya takes matters into her own hands. Kate faces backlash from her colleagues. Obie and Aki take a stand. Max navigates foreign emotions.

Gossip Girl: Rise and shine, followers! Gossip Girl here. Beginning another day checking your balances and holding your feet to the fire. Who were you before you met me? I bet you can't even remember. And that's how it should be. Because you don't exist without me. I'm your mirror. And a mirror can't reflect what it doesn't see. But maybe you're right to stay away. Because something tells me you're not going to like what I might show you today. Or maybe you'll just continue to see what you want to see. Because no matter how often I show you your truth, you seem to still go on believing the lie.

Gossip Girl: Good morning, followers. Trigger warning. This post would not be pretty. While I usually like to have fun, this is no time for frivolity. And while this is as of yet unsubstantiated, I cannot turn a blind eye to this blind item. It appears a certain father to one of Constance's most influential students is being accused of something very serious. We've always known this dad as dry, but he might have some bottles hidden in his closet. One of them allegedly used to ease a woman into a level of consent she had no intention of providing. Being that I'm breaking this news, I can't share anything further so as to not risk my credibility. All I know is there's a woman out there whose story should be heard. If she chooses to talk, we all must listen.

Gossip Girl: Followers, it's been a day. But it's not over, is it? You can't make a bonfire from just one match. You need plenty of lighter fluid to get it really going. Turns out, for the last decade, our doting dad has maintained a charming two-bedroom in the West Village, secret to even his nearest and dearest. A smart investment, or his pied-à-terre? Contrary to what you may have heard, this story is anything but over. 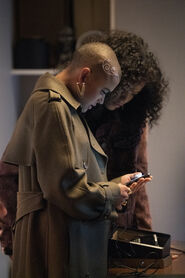