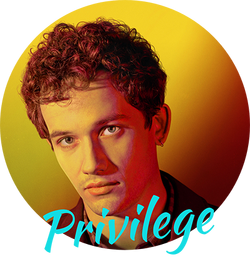 Otto "Obie" Bergmann IV is a main character in the Gossip Girl revival. He is portrayed by Eli Brown.

Obie is a political and sociopolitical activist who feels a strong sense of guilt over his immense wealth. He prefers to better New York through his volunteer work than hitting the party scene with his savvier friends. He is the richest kid at school, a fact he hates. He rails against his Hilton-level real estate parents, Otto and Helena Bergmann of the Bergmann Property Group, and can often be found protesting his own parents' developments. A flip on the first time around, our richest boy lives in a Dumbo Loft.

At the start of the "Just Another Girl on the MTA", Obie delivers food to the Navy Yard protestors outside of his parent's development before he arrives for his first day of junior year at Constance Billard St. Jude's School. He greets his girlfriend Julien Calloway with a happy kiss, though she remarks that he's sweaty and rumpled. He was supposed to do her Insta story, but he forgot as he was taking food to protestors who deserve something nice for the work they're doing. She questions what she deserves, but he promises to do the story later, much to Monet de Haan and Luna La's disapproval. The rest of the group funnels in, with Obie happily greeting Aki Menzies, Max Wolfe, and Audrey Hope. They exchange playful banter over what to call their friend group before getting caught up on Julien's half-sister, who is about to arrive at Constance from Buffalo, NY.

The group spends lunch together on the MET steps, where Max reminds everyone to attend the party at Dumbo Hall for fashion week. Obie notes that he and Aki will be late as they're stuffing envelopes. The group watches Zoya sit a few steps down, and Julien calls out to her, offering a photograph for Instagram. Obie is impressed and surprised by Julien, but more so when Zoya recognizes his Right to the City Alliance pin. Julien notes that Obie is the guiltiest and the richest of the guilty rich. She then invites Zoya to Dumbo Hall that evening, clearing it with her friends, with Obie happily welcoming Zoya to the group.

That night, Obie joins an elevator at Dumbo Hall and doesn't recognize Zoya as the co-rider for a moment. He compliments her outfit but notes that she looks like Julien. They enter the party together, with him giving her a Right to the City Alliance pin. She appreciates the gesture. They meet up with the rest of the group, and Obie greets Julien with a kiss. He is uncomfortable at the party. He hates that the people there choose to drink overpriced drinks instead of donating the drink money to charities. Obie gets upset when Julien mocks Ms. Keller for being unhappy in her teaching position. He is backed up factually by Zoya, which he appreciates. The night is interrupted by the first Gossip Girl blast. The blast outs Julien and Zoya as having known each other before Zoya's transfer and that Julien helped ensure Zoya got the art scholarship. Obie's feelings are hurt as Julien didn't tell him, even though she tries to rationalize that they couldn't risk their fathers knowing. Fed up with her antics, Obie decides to leave, but she reminds him about her story. He poses for the picture and leaves with Zoya. They get caught in the rain and go to his penthouse to wait for the storm out. Because of their dripping clothes, they strip in the entryway but are unknowingly photographed by one of Gossip Girl's spies. As they wait for the storm to end, the pair get to know one another and find a connection as they both appreciate the other's kindness and honesty. Once the storm passes, Zoya leaves to make her curfew.

The next day, Aki bombards Obie, as he's been defending Obie's honor all morning against Gossip Girl's followers. Everyone in the school has labeled Obie and Zoya as "cheaters." He rebuttals against a student's claim, but his efforts are futile. The next night, Obie attends Julien's fashion show and tries to talk with Zoya, who avoids him. During the show, Monet and Luna steal Zoya's phone to send out an illicit photograph of male genitalia which gets her escorted out of the event. Julien watches from her spot at the end of the walkway, doing nothing to stop her sisters removal. After the show, Julien fights with Zoya and gets into a car with Obie. She mistakenly thinks they can act as though everything is fine, but Obie can't do that anymore. He finally saw who she really is in there and, even though she promises to be different, he breaks up with her and leaves. The following morning, Obie greets Zoya at the entrance of Constance, and they walk into school together, much to Julien's disapproval from the balcony.

In "She's Having a Maybe", Obie dodges Julien's multiple texts apologizing for the fashion show incident. She sees that he liked her Instagram post and attempts once again to reach out, but he lies that he's going to bed early. In actuality, Obie gets off the subway station and texts Zoya, asking if she's around. They meet outside her building since she's grounded and isn't allowed to leave. He explains that he went for a walk hours ago but somehow finds himself in her neighborhood. She compliments his smile and then tries to mimic it, causing them to laugh. She's been keeping a low profile after everything that happened. They say goodnight but don't notice when one of Gossip Girl's many spies snaps a photo of them together.

Julien intercepts Obie in the halls the next day and confronts him about their breakup. She wants to get back together as she's learned her lesson. He apologizes, but they broke up, even if she doesn't believe that. He presses that they are over and have been for a while, as they aren't happy together. He walks away to sit at a table with Zoya in the courtyard, where he attempts to ask her on a date. She politely declines as she can't date him because of her problems with her dad and Julien. Obie promises to find a way for them to go on a date without anyone else knowing. He keeps his promise that night when he arranges for her and her father to attend the charity gala for Constance that night. He ensures their tables are back-to-back, thus, going on a date without being conspicuous. As they talk, Julien swoops in to talk with Zoya and sharply tells an interrupting Obie that this has nothing to do with him. The sisters argue over their dads being in the same room, though Zoya is hurt that Julien still hasn't told him about her. Julien storms off angrily.

Obie convinces Zoya to leave with him for the second part of their date. He takes her to a local arts and crafts supply store, as he convinced the owner to open the store for a few hours just for them. He tells her that they can do their own charity shopping with his credit card. As time progresses, they have fun - laughing, playing, and scooping up basketfuls of supplies. They share their first kiss at the end of one of the aisles. Their happiness is interrupted when Zoya sees her father outside the shop and confronts him. She and Obie walk into an ambush orchestrated by Julien, Monet, and Luna. Julien's father, Davis, is also present. Obie tries to reason with Nick, who cuts him off angrily. Nick eventually tells Zoya to leave with him. Obie enters the shop to pay for the supplies, giving Julien a disapproving look.

Julien and Zoya call a truce as Julien realizes that she and Obie don't fit anymore. She wants Zoya to stay at Constance. Julien convinces her by saying she won't interfere with Zoya and Obie's relationship. That morning, Obie finds Zoya in the hallway, and they kiss in front of everyone, outing their relationship as they become official. They walk to class together.

Obie has pale skin, warm brown eyes and short curly brown hair. He has a slim yet toned build. He dresses quite casually compared to his other students, preferring simple shirts paired with denim jackets or jeans. He is the poor little rich boy who wears an expensive denim jacket to school, which he has added the CB and SJ logo too.

Obie is the definition of guilty rich. Unlike his peers, Obie is painfully aware of the reality around him and the impacts of financial and sociological greed. He seeks to help the world and approval for his deeds, but is often disgusted by the wealthy's inability to donate to charities or good causes. He has a penchant of social justice and tries to encourage his friends to join his protests, even though they turn him down each time. However, often he can be hypocritical and selfish towards those that do not meet his standards, he unknowingly tends to look down on anyone that goes out of the box of his perception, see Zoya and Julien who have challenged his very different personalities. 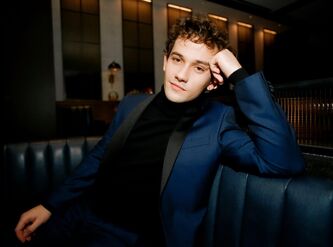 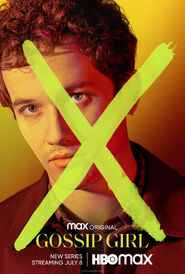