Originally shown as academic competition for Blair Waldorf, Nelly eventually becomes one of her minions before turning her back on the Queen B. As an adult, Nelly is a successful magazine editor and the boss of several employees.

Nelly makes her first appearance in Desperately Seeking Serena as a student at Constance Billard School who also aspires to attend Yale University. SATs are coming up and Blair realizes that Nelly is her main competition for admission to Yale. She has Penelope and Hazel try to invite Nelly out but Nelly is disinterested and says the only thing she wants is to never listen to Flo Rida again. Later that day, Blair plays some Flo Rida music as she walks by, which upsets Nelly. She admits that her ex-boyfriend, Todd, broke up with her at a Flo Rida concert and Blair invites her to come to her penthouse to relax and talk it out. That night, Blair invites Todd over and bribes him to ask Nelly out to talk about their breakup. Nelly is grateful to Blair, but is disheartened after Todd says he doesn't want to get back together. The next morning at the SATs, she tells Blair that she was up all night crying and isn't prepared for the test; dropping her calculator in the process. Blair picks it up for her and steals the batteries to ensure Nelly doesn't do well.

By the time school begins in The Ex-Files, Nelly has become a minion of Blair's. However, she is shown to be treated like a slave and doesn't have the same privileges as the other girls do.

In In the Realm of the Basses, Jenny Humphrey returns to Constance after being homeschooled for a semester. She notices that Nelly is treated badly by Penelope, Hazel, and Isabel Coates and befriends her to help change it. Along with Eric van der Woodsen, Jenny is able to win Nelly her freedom from the other girls but learns that Nelly was only using her to increase her social standing. After Jenny is disavowed by the other girls, Nelly rejoins them and abandons Jenny. In You've Got Yale!, Nelly is secretly pleased when Blair is waitlisted by Yale. Blair blames her new teacher, Rachel Carr, for having her waitlisted by giving her a B on an essay and decides to set her up by sending a rumor about her secretly dating Dan Humphrey. However, Dan figures out it was Blair and informs Headmistress Queller; a move which Nelly confirms, as she witnessed Blair send the tip in. Afterwards, Blair is expelled (Carrnal Knowledge). In The Age of Dissonance, Yale officially rescinds Blair's early acceptance and gives the spot to Nelly instead. In the season finale The Goodbye Gossip Girl, Chuck Bass suggests that Nelly could be Gossip Girl but Serena van der Woodsen says there is no way that's possible. During Nate Archibald's graduation party, Nelly gets drunk and almost tells Dan that she has a crush on him but backs out at the last minute.

Nelly returns in High Infidelity as a reporter from Women's Wear Daily who is set to interview Blair about her taking over Waldorf Designs. When Blair realizes that her collection includes the same patterns as Poppy Lifton's, she assumes Nelly set her up and attempts to sabotage Poppy. At Serena's Conservancy Gala event, Nelly informs Blair that she was never set up and it really was just a coincidence. Also at the same event, Nelly finds Dan and encourages him to be his own man and stop following what everyone else wants. In Dirty Rotten Scandals, Nelly attends Blair's fashion show and reports on Sage Spence's strip show; simultaneously calling Blair's line trashy and likened to strippers. That night, she tries again to get with Dan but he turns her down once again.

In Where the Vile Things Are, Eleanor Waldorf invites Nelly to have lunch with Blair to fix Blair's relationship with fashion media. However, Blair is rude to her and ends their lunch by threatening to blackmail Nelly with photos of her in Constance's The Age of Innocence production. After hearing this, Eleanor fires Blair from Waldorf Designs. That night, Blair resigns from the company and tells Nelly to report on that to restore their otherwise pristine reputation. Later, Nelly finds Blair sitting on the Met steps and thanks her for the exclusive.

Nelly makes an appearance at the Halloween party in New York at the request of Obie Bergmann IV. She is a high-ranking employee at a magazine company. When she spots Zoya's costume, she immediately asks if she is Chuck Bass. 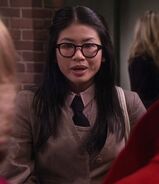 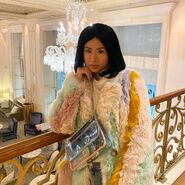