watch 03:01
'Gossip Girl' Profile: Lola Rhodes
Do you like this video?
Play Sound

"The End of the Affair?"

"New York, I Love You XOXO"

Charlotte "Lola or Charlie" Rhodes is the daughter of Carol Rhodes and William van der Woodsen. Carol was unaware Lola is living in New York and attending Juilliard, as she was under the impression that Lola was attending Michigan State University. She is played by Ella Rae Peck.

She is a recurring character in season five and is briefly shown in season six. Lola appeared in fifteen episodes.

Lily had been upset that Charlie (Ivy) hadn't been seen since the accident and hired a private investigator to track her down. The investigator accidentally found the real Charlie, who was enrolled at Juilliard. When Lily thought she saw Charlie, she called out her name and Lola turned around and said that was indeed her name which lead to Lily believe she found the wrong Charlotte Rhodes. At the end of the episode, Lola is asked for ID and when she opens her wallet, viewers see a photo of her and Carol (The End of the Affair?).

She works for the catering company that worked for Blair and Louis' wedding and The Spectator's holiday party, where she first met Nate. During Blair and Louis' wedding in G.G. she and Nate begin to talk; however Nate overhears her lying to her mother and begins to distance himself. When he decides to give her a chance, she refuses, not wanting to become involved with the world of the UES.

In Crazy Cupid Love, Lola, catering a party at The Empire, runs into Ivy, who she knows from an acting class they took together in Florida. Nate, still under the impression that Ivy is really Charlie, explains the situation to Lola. Afterwards, she tries to friend request Ivy on Facebook but gets no response. Eventually in Cross Rhodes, she calls Ivy from Nate's phone to demand answers as to why she's using her name. A Gossip Girl blast tips off that Ivy as Charlie is at the hospital, and the blast alludes to her mental illness. Meanwhile, Lily, Rufus, Carol and Serena are there too, waiting for news about a dying CeCe. Lola goes to the hospital, sees her mom Carol and asks what she is doing there. Ivy tells Lola, Lily, Rufus and Serena the truth about who she is and why Carol hired her. After hearing everything, Lola cuts Carol off and leaves the hospital. She begins to lean on Nate and the two begin dating.

Lola is dragged to CeCe's wake by Georgina Sparks. Lola decides to not take part in the brewing war between the VDW's, Carol, and Ivy, after CeCe leaves Ivy everything. Lola begins to questions her mother's motives again as to why she was hidden from all of the family she never knew existed. Also at the wake, Carol confesses to William van der Woodsen that Lola is his daughter, making her Serena and Eric's sister as well as their first cousin.

Nate and Lola begin to have a rocky relationship when Nate's ex Diana Payne arrives back in New York. Wanting to rid of Diana for good, Nate and Lola try to blackmail Diana. However at the same time, Serena is trying to make Lola the new It-Girl and she gets caught up in the scheme, and feels used. This damages Lola and Serena's relationship. During Serena's short stint as Gossip Girl, she begins to sabotage Lola's acting career. Lola begins to suspect Serena is Gossip Girl, and relents her suspicions to Nate, who brushes them off. At Blair and Dan's salon in Salon of the Dead, Lola sets up Serena to reveal that she is Gossip Girl. It goes wrong and ends with her accidentally live streaming Diana admitting she is Chuck's mother. Serena asks Lola not to reveal what she knows, and she obliges, causing Nate to question their relationship. However, Lola and Nate eventually team up with the real Gossip Girl to steal the site back from Serena. Lola and Serena go head to head, ending with Serena discovering Lola is her sister. She tells Lily, who in turn sets up Carol into revealing what she did to the police, with Ivy's help. Lola finds out that Lily tried to sabotage Carol's defense and gives Ivy the inheritance money back to take down Lily.

Both Ivy and William mention that Lola is acting away from New York. In the series finale's time jump, Ivy's autobiography Ivy League becomes a movie starring Lola and Olivia Burke. When Gossip Girl is revealed in New York, I Love You XOXO, Lola is seen reading the blast about Gossip Girl's identity and replying with "What..seriously?"

Lola is blonde and around 5"4'. It's noted that she and Ivy could pass for sisters. Her style is casual, usually jeans and sweaters. However, she is seen wearing dresses and skirts on occasion.

"After today, there is no us. I don't want anything to do with you." -Lola

"This morning while I was in the shower at Nate's, Serena, the cousin I just found out about, tricked me into coming to the wake of the grandmother I never knew existed, at the house of the family that you hid from me my entire life. Does that sum it up?" -The Princess Dowry (5x17)

"I can't believe you're taking their side. They're just using you and when they're done they'll throw you out, just like they did me." -Ivy

"I'm officially resigning from the Upper East Side. I have a whole life at Juilliard where the drama is reserved for the stage, and I think I belong back there. So if you want the Upper East Side back, it's all yours. You're the only It-Girl who matters anyway. You see to that yourself." -Salon of the Dead, (5x20) 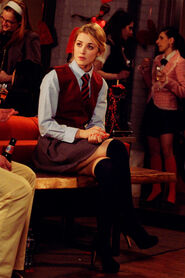 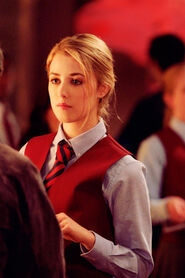 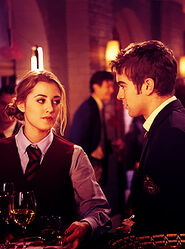 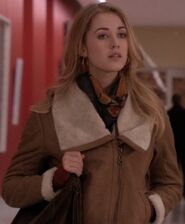 Add a photo to this gallery
Retrieved from "https://gossipgirl.fandom.com/wiki/Lola_Rhodes?oldid=79949"
Community content is available under CC-BY-SA unless otherwise noted.