New York, I Love You XOXO

Juliet Cynthia Sharp is a recurring character in the fourth season of Gossip Girl, during which she served as the main antagonist. She appeared exclusively within the television adaption and is portrayed by Katie Cassidy.

Juliet Sharp is introduced as a student at Columbia University and served as the primary antagonist of the first half of season four. She is from Cornwall Connecticut the same place Serena Van Der Woodsen attended boarding school.She has a personal vendetta against Serena van der Woodsen because she believed she was the reason her brother, Ben Donovan, was sent to prison, although it was later revealed that it was actually Lily van der Woodsen.

Juliet makes her first appearance in the season premiere Belles de Jour as a girl Nate Archibald was attracted to at a restaurant. Later, he runs into her at a Fashion's Night Out Luncheon hosted by Lily and Eleanor Waldorf. He attempts to flirt with her but she turns him down; although she goes with him to his suite at The Empire when he gets a call about an emergency. Afterwards, she gives him her number and advises him to call if he needs someone to talk to. When he discovers Serena van der Woodsen is planning to return from Paris and attend school at Columbia, he calls Juliet and they make plans to talk. They end up talking all night and she agrees to help him get his life in order, including the triangle between himself, Serena, and Dan Humphrey. She is able to reunite Dan and Vanessa Abrams, but by doing so, causes problems between Dan and Nate. However, she apologizes and when Serena returns, she and Nate act like a couple to make her jealous (Double Identity).

In The Undergraduates, Blair Waldorf and Serena attempt to join Hamilton House at Columbia. When they arrive, they discover that Juliet is the key master. Juliet presents a key to Blair before informing Serena that she doesn't have one for her. She also attempts to pit Blair against Serena, but each of her tries are ill fated and eventually the two expose Juliet's sabotaging plans. As a result, Lily, also a member of Hamilton House, removes Juliet as key master to get Serena in. However, Nate is annoyed by what Serena and Blair did to Juliet and sides with her. It's also revealed that Juliet and a mysterious man in prison, Ben Donovan, are working together to mess with Serena. Soon after, Nate becomes suspicious of Juliet and assumes she is cheating on him. She assures him that she isn't, and she spends a lot of time with her troubled brother. After a party thrown by Chuck Bass, she invites Nate to an apartment she paid the doorman of the building to use, and lies that it's hers (Touch of Eva).

In Goodbye, Columbia, Juliet sends a tip to Gossip Girl that Serena has an STD. Serena immediately suspects that Juliet is responsible, but eventually gets over it. At a Hamilton House party that night, Juliet uses Vanessa as a scapegoat and successfully blames the rumor on her. As a result, she and Nate have sex that night. The next day in Easy J, Juliet finds out that Nate's father, Howard Archibald, was transferred to the same prison as Ben and informs him. Meanwhile, Ben suspects that Juliet is getting real feelings for Nate and has his father beaten up as a message to her. Not wanting Nate to get in the middle of things or get hurt, she breaks up with him. Right after, it's revealed that Juliet is given money to live on from her cousin, Colin Forrester, a new love interest and professor of Serena. When she finds out that Colin and Serena are sneaking around together, she decides to take photos of the two kissing to use against her (War at the Roses). In Juliet Doesn't Live Here Anymore, Nate discovers that Juliet lied to him about where she lives. Wanting to know what else she lied about, he pairs up with Vanessa to find out. While Vanessa searches her apartment, Nate takes Juliet out for coffee to talk. During their conversation, Juliet reveals her secret: that she comes from a poor family and feigns being rich to fit in at Columbia. Glad to finally have the truth, Nate calls of the search and invites Juliet to the New York City Ballet that night. However, Vanessa finds the photos Juliet took of Serena and Colin and steals them when Juliet decides to delete them. At the ballet, Vanessa tells Juliet that Nate set her up and that he would never choose her over Serena. Realizing that she is right, Juliet tries to tell Dean Reuther about the photos but Blair is able to drown the USB drive in champagne before the dean sees. Afterwards, Blair, Serena, Chuck, and Nate banish Juliet from Columbia and Manhattan for trying to ruin Serena's life. At the same time, Colin cuts Juliet off for taking photos of him and Serena. Not wanting to give up, Juliet teams up with Vanessa and Jenny Humphrey to carry out her vendetta.

They put their plan into action in The Witches of Bushwick. To ruin her relationships with Dan and Nate, Juliet and Jenny toy with them while dressed exactly like Serena and cause them to lose all interest in playing Serena's games anymore. To ruin her friendship with Blair, Jenny exposes her sharing a kiss with Chuck in her slip. And finally, to put a final nail in her coffin, Juliet drugs Serena into an overdose and leaves her in a motel room in Queens. On Thanksgiving in Gaslit, Serena wakes from her overdose and calls for an ambulance. Upon hearing about what happened, Lily has her committed to involuntary rehab. Serena is adamant that she didn't do it, and believes so until a photo of her doing cocaine appears on Gossip Girl. Realizing that maybe she did do it, she admits herself back to The Ostroff Center. Meanwhile, Juliet warns Vanessa and Jenny not to come clean about what they did. She then plans to leave town and packs up her apartment. Before she goes, she collects a check from Lily, saying she won't expose anything about Serena as long as she keeps getting paid. When Jenny tries to see her later, she discovers that she has left and brings Blair evidence that Juliet, not Serena, did the drugs and caused the overdose.

In The Townie, Dan and Blair travel to Cornwall, Connecticut, to learn the truth about Juliet. While there, they run into Damien Dalgaard, who helps them piece everything together. He explains that when Serena attended The Knightley School, she had an alleged affair with her English teacher, Ben, and that he was fired for sleeping with a student right after Serena left the school. They end up visiting Juliet's mother's house, and they then discover that Ben and Juliet are brother and sister. Meanwhile, in rehab, Serena is telling the whole story to a therapist. She explains that while she harbored a major crush on Ben, nothing ever happened between them. At the same time, Juliet informs Ben that she's done with their plans and is going to confront Serena herself. After they talk, Serena realizes that Lily is the one who had Ben sent to prison. The two then head to the VDW's to confront Lily, and once there, Serena lets Juliet go; promising to get Ben out of prison. On her way out, Juliet swears she isn't going to hurt Serena or anyone else ever again, but is deeply hurt whe Nate tells her he doesn't believe nor trust her.

Juliet appears next in the series finale, New York, I Love You XOXO, during the reveal of Gossip Girl. She's seen reading the blast on a street and responding with "You have got to be kidding me."

"Are you kidding? Serena took her best friend's boyfriend's virginity, ran away to boarding school, bounced from guy to guy until dating your married Congressman cousin, fell in love with you, then cheated on you with your friend who's also her ex?" -Juliet

"The only thing that would make it better is if one of those boyfriends turned out to be her brother." -Juliet

"The life of Serena van der Woodsen is like the most complicated Jane Austen novel ever. Aren't you glad you've finally reached the last chapter?" -Double Identity (4x02)

"If there was a line that you wouldn't have crossed, you should have told me before I lost everything. Happy Thanksgiving, brother." -Gaslit (4x10)

"And then you just left me for dead in a motel room? Why, because of Nate? Or Colin?" -Serena

"No, you stupid bitch, because you destroyed my brother's life!" -The Townie (4x11) 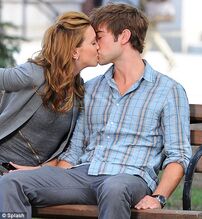 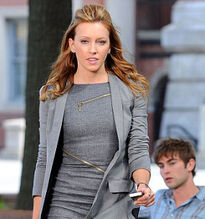 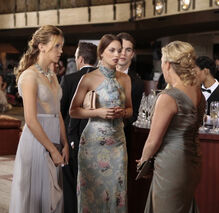