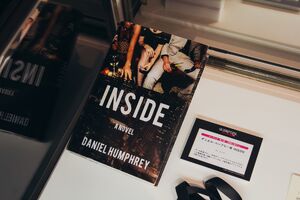 Inside is the first novel penned by Dan Humphrey in the Gossip Girl television adaptation. The book was written over the course of the first four seasons and released in Memoirs of an Invisible Dan during the fifth season.

Inside is a fictional retelling of life on the Upper East Side through the eyes of Dylan Hunter, a character based on Dan himself. The book was never meant to be published but after finding the manuscript and arguing with Dan, Vanessa Abrams gives it to a publisher (The Wrong Goodbye). She later sends Dan the check for the manuscript, written out for ten thousand dollars.

In the season five premiere Yes, Then Zero, Dan finds out via his old mentor Jeremiah Harris that Inside is being published under an anonymous pseudonym. He quickly figures out that Vanessa sold the manuscript and attempts to find out which publisher she sent it to. Before he can, he learns a chapter about Clair Carlyle, a character based on Blair Waldorf, is being published. Knowing she's preparing for her upcoming wedding to Louis Grimaldi, he asks for his help in killing the story before it comes out. They succeed, and when relaying the events to Rufus Humphrey, Dan admits the story came from a whole book.

Returning to his goal of finding the publisher, Dan enlists Chuck Bass to help him. They find the publisher and Dan learns the book is definitely coming out (Beauty and the Feast). Dan realizes the publisher, Simon & Schuster, also represents his old mentor, Noah Shapiro, so he turns to him for help. Noah tells him to just ignore the book and everyone else will too. However, he later finds out that Noah is planning to take credit for writing Inside and Dan seeks to stop him. But when he arrives to confront him, he learns it was a ruse to get him to admit publicly that he is the author. After they meet, he receives a copy of the book edited to include his name as the author (The Jewel of Denial).

In Memoirs of an Invisible Dan, the book is officially released and Dan admits to everyone that while the book includes characters based on them, it isn't how he really thinks of them. At first, everyone is excited for Dan and agree to come to the book release party. However, Louis reads the part that involves Dylan sleeping with Clair, and thinks Dan really slept with Blair; putting strain on their relationship. Serena loses a big movie deal when Daniel Day Lewis reads the book and thinks she is just like Sabrina, her character in the book. Nate and Rufus believe that Dan thinks very little of them after learning about their characters, and Chuck thinks that his life will be as sad and lonely as it's portrayed in the story. Angry at what Inside has caused, everyone goes to confront Dan at his party. He tries to explain that the book doesn't speak to any deeper truth, but they all begin to ice him out anyway.

After Serena's boss Jane reads Inside, she decides she wants her company to produce the film adaptation. She orders Serena to get the rights, so Serena pretends to forgive Dan and earn his trust back. He agrees to give her the rights but his agent, Alessandra Steele, warns him not to give them away just yet. So he backtracks, much to the dismay of Serena and Jane. However, he later decides to give them to Jane anyway (The Fasting and the Furious). In I Am Number Nine, Dan finds out Inside is in the top ten bestseller's list. When he has his first production meeting with Jane, he discovers they want to make the story into a musical and completely change the point of the book. Knowing that they're planning to ruin the book, Serena and Diana Payne have the movie killed. As a result, Serena is fired from her job and Dan's book drops off the best seller list.

After the movie deal dies, Dan is expected to go on a book tour to drum up sales again. However, he ends up skipping all the scheduled events due to feeling like he accomplished nothing with the book's publication (The Big Sleep No More). In Riding in Town Cars With Boys, Dan is asked to write a new afterword for a rerelease of the book. At first he is unsure what to write, but after a conversation with Serena, realizes he needs to write about how the book changed him and all of his friends. In Cross Rhodes, Dan attends a performance of his book by the Upright Citizen's Brigade starring Serena's cousin, Lola Rhodes.

Like the Gossip Girl novels and television series, Inside takes place in New York City, primarily on the Upper East Side. Notable locations include:

"Order, order" shouted a voice over the sound of a loud bang. Immediately, we all stopped what we were doing and turned to face the front of the classroom. Standing behind the podium with a gavel in hand was Clair Carlyle, the president of the Florence School for Girls' sophomore class. When Clair demanded attention, everyone respected her request. She was small yet giant. Young yet adult. Girlish yet macho.

Clair politely grinned at her fellow classmates for following her instructions. Though it wasn't as if she ever thought we would do otherwise. That's because Clair never saw us as peers. We were more like her fans and she, our fearless leader. Clair was in charge and we were her hapless minions. "Our primary order of business today is to discuss what will be the first fundraiser of the school year!" Clair cheerfully announced. "After a long and thoughtful process of choosing the perfect charity, we have decided on the very deserving organization 'Makeovers for the Homeless'!"

People clapped and cheered. I think I even heard a "bravo." All in celebration for what my peers really believed to be a worthy cause. I had a different reaction, of course. I felt my eyes roll into the back of my head. Could this organization be real? The thought of someone sitting around one day and all of a sudden declaring "By George, I think I've got it! I am going to start a charity that will give makeovers to homeless people!" was bonkers. Add to that, those around me concurring with "Wow! That is a good idea and exceptionally philanthropic!" was beyond ridiculous. But I guess at Florence School for Girls and the St. Joe's School for Boys, I was alone in this thinking because everyone else was instantly behind it.

There was an audible shudder hear around the room at the mere utterance of Rite Aid. What was so bad about Rite Aid anyway? It was where I bought all my toiletries. "You have something to add, Charlie Trout?" Clair asked, nodding to the imp sitting in the back of the classroom. "It would bring me no greater pleasure than offering up one of my hotels, The Castle, as the location to host this super fundraiser. I know we can provide the best possible service and hospitality for such an earnest and well intentioned event," purred Charlie as he fixed the scarf that hung around his neck. "Thank you, Charlie. That is ever so gracious of you as well as beyond-" "Ah! Sorry, I'm late!" proclaimed a lively voice entering the room with a loud commotion. We all looked over at the door. Sabrina Von Skoneker was standing there with a burly ma in a uniform, who was pushing a car full of wooden boxes. "Did somebody say happy hour?" "Sabrina, we were in the middle of a meeting," Clair chastised her best friend. "Oh, come on, Clair. Live a little. Open 'em up, Bud." The man obliged and grabbed a bottle of bubbly and popped it open as if it were a can of soda. "Who wants a glass? Or five?" People raised their hands and Sabrina began doling out the champagne into plastic cups. Clair looked around the room. This surprise visit had turned her orderly meeting into o a raucous party. Looked like this dictator had a revolt on her hands. But then an unexpected yet amazing thing happened. Sabrina approached me with a bottle in her hand. "Champagne for my real friends. Real pain for my fake friends." Sabrina giggled as she poured me a glass. She raised her bottle to my cup and clinked our beverages together.

Inside Out is the shorter sequel to Inside. It is a tell all novel and exposé, chronicling everyone on the Upper East Side. Also written by Dan, it is essentially a retelling of every event in Inside but with the real names and happenings. As he could not find a publisher willing to buy the work unedited and in its entirety, Dan resorted to having Inside Out published in The New York Spectator before reaching a deal with Vanity Fair. However, the book's final chapters, as well as the reveal of Gossip Girl's true identity, were once again published in The Spectator.

Once Inside reached the bestseller list, a battle broke out over the film rights to the novel. By the series finale, the film adaption of the novel's follow-up, Inside Out, had begun production.

In the series finale, the casting process had begun for the film adaption of Inside Out, the follow-up to Inside. Below are those considered for their respective roles: