Helena Bergmann is a guest character in the Gossip Girl revival series. She is portrayed by Lyne Renée.

Helena is a cold as ice global real estate magnate and former top model, who is the mother to Otto “Obie” Bergmann and Heidi Bergmann.

Helena was born in Germany and had a successful career as a top model before she retired to enter real estate. She became a global real estate magnate and is known for her controversial decisions. She became close friends with media tycoon Roger Menzies and they did several large business deals over the years. Helena eventually had a son, Otto Bergmann IV, who she had raised in New York. She was largely absent from his life, only flying in once and a while to check on her business or to see her son. She was close to Obie's longtime girlfriend Julien Calloway and had her name monogrammed on towels. Helena's decision to tear down a condemned homeless shelter sparked much controversy as it was near the Navy yard and would displace hundreds of families, despite the lucrative housing that would replace it. Unbeknownst to her, Obie not only supported the protests happening there, but organized them himself.

Helena is a sleek and high-class woman whose sense of style reflects her wealth and stature in the world. As former top model, she is tall with a slim build that is perfectly toned. She has a square jaw, thin lips, and high cheekbones. She has blue eyes and long dark brown hair that is always curled to perfection. She wears high-end clothing that flatter her figure yet are elegant. Helena likes gold jewelry that is simple, such as a gold watch, a simple gold chain bracelet, and a singular ring. She is always seen in black stiletto high heels. 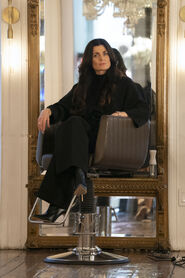