Davis Calloway is a recurring character in the Gossip Girl revival. He is portrayed by Luke Kirby.

Davis is the absentee father of Julien Calloway, who holds a grudge against Nick Lott for his affair with Davis's wife that resulted in the birth of their daughter.

Davis married Marion and they had a daughter, Julien. Davis was wealthy due to his exceptional career as a record producer for musical artists. Marion, however, was unhappy with her life and had an affair with Nick Lott. She left her husband and daughter to be with Nick, and had a child with him named Zoya. Marion died before she had the chance to raise either of her girls. Davis was left a single father and kept Julien in New York, though he was distant due to the travel his job demanded. However, he forbade Julien from forming a relationship with her half-sister and refused to speak to Nick due to their complicated past.

He has been dating Lola Morgan, in secret, for a year. He would occasionally lie to Julien about traveling abroad for work when in reality he is staying with his girlfriend in a secret apartment.

In "Just Another Girl on the MTA", Davis arrives at Julien's room to say goodbye as he has to fly to LA for a recording session. He wishes her a good first day of school. 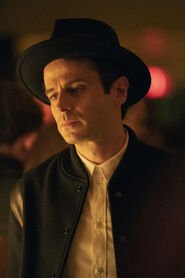